I can’t believe our show finally aired!!  The whole process began way back in November 2014 when I sent my email begging to be on the show which I wrote about here.  If you watched our episode that aired on Sunday night, you would know that the wives won!! But, the husbands were great sports! It seemed like it was going to be very close until the infamous headboard turned into a bench didn’t sell.

Basically 24 hours of taping was edited and packaged into the 24-ish minutes you got to see on TV.  If that wasn’t enough for you, I am going to share with you some behind-the- scenes pictures and stories about our experiences.  In order to not overload you with all of it at once, I am breaking it down in 3 separate posts: Buy Day, Workshop Day, and Sell Day which I will be sharing the rest of this week.

So let’s drive right in with our 1st day: the Buy Day!

When we found out we were going to the Elephant’s Trunk, in New Milford, Connecticut for our Buy Day, I was super excited because I had been there before.  It’s amazing! Lots of diverse vendors who have items priced to sell.  I also felt more comfortable knowing “the lay of the land.” Other episodes in our season had been taping at Brimfield Flea Market  located in Brimfield, Massachusetts and it’s massive.  Although it’s a flea market that I have been dying to visit, with just 1 hour to find our items, I was worried that I would be overwhelmed with too many choices.  (It is definitely on my radar for my summer; it’s open July 12-July 17th! Road trip, anyone?)

Because our call time was 6am at the flea market, we were provided a hotel room.  John and I met Melissa and Rich for dinner that night in Connecticut and it was hilarious which was exactly what I needed; I was so nervous but being with my husband (even though he was technically soon-to-be “the enemy”) and our friends made it so much fun!  Our daughters (who are best friends) were allowed to come too so it was even more special to share this experience with them.

The next morning we arrived at the flea market and immediately found the crew. Kind of hard to miss, right??

The crew was easy to spy with their multiple tents, trailers with equipment for filming&sound, RV for host Lara Spencer; it was a mini-camp set right up outside the gate at the flea market.  I also noted right away how kind everyone was. We met our producer Michael for our show and immediately began getting ready for taping.  I was excited not only to tape our show but I was also dying to check out all the vendors.  I could see so many fabulous items from our camp and couldn’t wait to dive in!  But I should have contained my enthusiasm just a bit.  Because the crew was taping 3 shows that day, it would be several hours before Melissa and I got our hour to shop.

We were all then wired with our mics and told to wait. Melissa & I talked strategy — what kinds of items we hoped to find, how much money we wanted to spend, etc.  Our husbands seemed to spend a lot of time on their phones, checking out Pinterest, and complaining to me.  Poor John.  Being on this show was definitely out of his comfort zone and the pre-taping jitters was setting in.  I will always be grateful he did this for me!

While we waited, we were able to check out the other episodes being taped.  I couldn’t wait to meet Lara.  Not only am I a super fan of Flea Market Flip, but I also love watching her on Good Morning America.  She has so much energy and she did not disappoint in person.  Even though she was taping 3 different episodes, she didn’t seem to ever get tired.  She’s a dynamo!  I also loved checking out her outfits; they changed depending on which episode she was taping but she always looked fabulous!

Before the actual “buying” began, we taped lots of interviews led by our producer Michael.  He asked us questions about our style, ideas of items we were looking for, and how we thought our husbands would fare.

The day might have started out dreary but it quickly warmed up and I was melting in my jeans.  A lot of people have asked if we were given outfits to wear or if we had our make-up done and the answer is no.  We were given just a few simple guidelines to follow when selecting our outfits like no white shirts or busy prints.  I spend a lot time planning my outfit which isn’t so obvious when you look at me.  I wanted to wear something bright on top to stand out but also wanted to be fully covered on the bottom in case I had to be filmed bending down — yikes! Jeans seemed like a good choice and I really wanted to wear a hat.  But the crew said it was casting shadows on my face and I had to take it off.  So here I am, hat head and all, looking not so lovely.

Our poor crew! We had the giggles and could not stop.  Not sure how many retakes we had to do that day but it seemed like hundreds.  In the blazing hot sun. We tried really hard not to complain though because the crew filming us had to lug around extremely heavy equipment.

The husbands had a lot to say about us during their interviews but I am trying hard to remember that it was all in fun, right? I made some equally snarky comments about them too.

After all of our interviews, it was time to get started. Our “buy” portion of the day started around 1pm.  By this time, Melissa and I were so nervous we would have difficulty finding pieces to buy.  All of the good stuff goes super early at flea markets.  We didn’t take many pictures during this part because we were being filmed and we really only had 1 hour to buy all three pieces so we were extremely focused.   The husbands also did their buying at the same time so it was really fun to see them in our episode since we couldn’t see that part during our filming.

Lara gave us our flip list, $500 a piece, and we were off … literally! We ran just like it seemed on our episode and raced to find our 1st piece.

Unlike the episode, we found our stools right away.  In fact, Lara was with us when we spied them.  Melissa and I both loved them and saw their potential in spite of their dated backs and hideous seat cushions, but Lara was pretty hesitant and seemed to question their appeal.  But for $40 for both stools, we decided to buy them anyway.   I’m glad we did because as you saw in our episode, it was our 1st sell and we made a terrific profit. 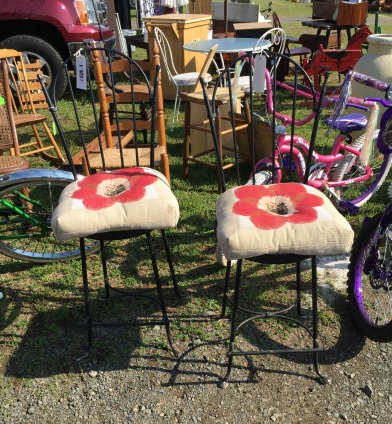 We tagged the stools with the Flea Market Flip sold sign and continued our hunt.  The crew later returned to each of the vendors to bring our pieces back to the tents.  If only I had someone to always do this for me when shopping at flea markets! But more importantly, if only someone always gave me $500 to spend too!

The next item we purchased was the industrial cart — we crushed hard on this piece.  I wish I owned it! We didn’t get a picture of it when we bought it because I totally forgot but this was taken later back at the tent.

The last piece we purchased initially was my least fav.  We originally planned on buying some kind of bench but we couldn’t find just what we wanted and time was ticking.  We spied this table and kind of on impulse, with no real plan, went for it!  Again, we forgot to take a picture at the booth where we bought it because again, we were crazy, crazy but here it is back at the tent.

And a close up of the top. 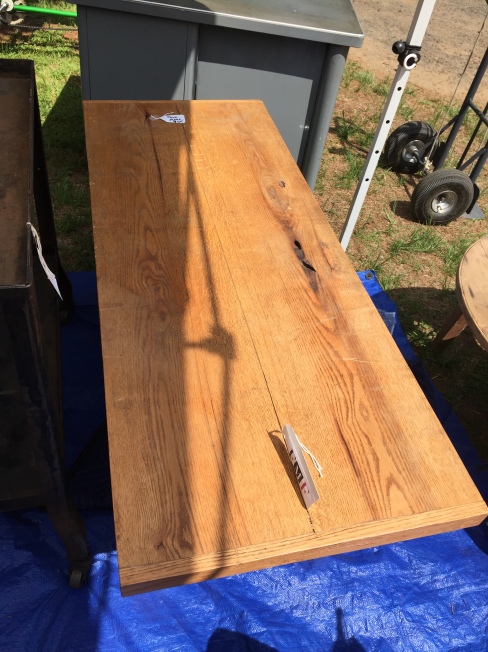 We weren’t sure what exactly we wanted to do with it but there was no going back.

If you watched Season 6, Episode 12 you might recognize this really cool industrial drawers.  Melissa and I spied them too but they were snatched up by another team before it was our chance to buy.

We also loved this industrial cart but it was pricey and we were worried we would not make a great profit on the flip. 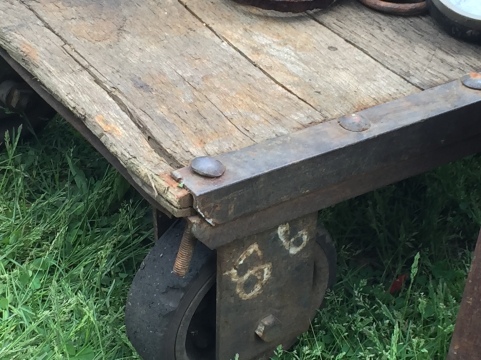 Here’s what the husbands bought…

The door which would later become a shelving unit.

The chest which would become a coffee table.

And the headboard/footboard turned into a bench. 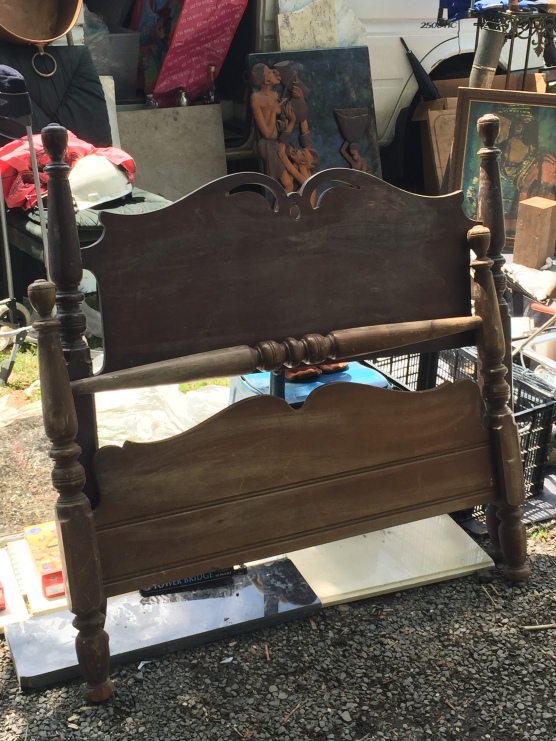 More pics of the chest back at the tent. I loved the metal detailing. 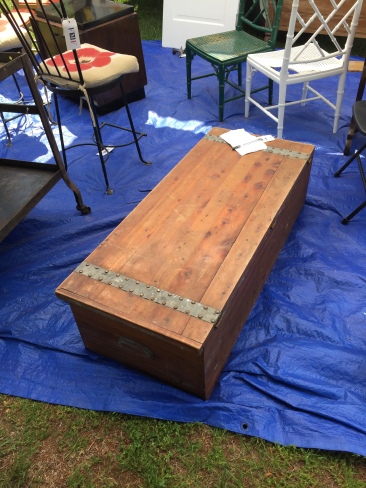 Before we were done for the day, we had to show our purchases to the crew’s art department and Cija, one of the skilled craftspeople who work on the show.  They wanted to ensure that we could realistically complete our vision for each of our projects.  Here’s a picture of John and Rich during their meeting.

After that, we measured all of our items so we could accurately plan our flips.  We had to tape a few more sound bites and then we were set free, about 9 hours later.  It was a LONG day, but so fun!  It was really interesting to see how the show was taped and all of the logistics that go into each episode.  It was also fun being followed by a film crew; we met so many people who are fans of the show and promised to watch our episode.

So that sums up our Buy Day (if anyone is still reading)! Phew…this was a long post.  I feel like I should congratulate you for sticking with me (Hi Grandma!)   Next up will be a behind-the-scenes look at our Workshop Day.  In the meantime, shoot me a question if you have one!

Christmas scenes from Wicklow, Ireland 🎄
My senior - @paige.leigh.johnson captured him so perfectly.
Same place (ish), same ring and same guy! When we got engaged in San Francisco in 1999, I could never have imagined the life we would live together but so thankful that you’re the one ❤️
Napa feels good for my soul.
Vintage vibes on this sunny, crisp summer morning — the linens are extra special because they were my grandma’s.
Follow angieburke.com on WordPress.com